Stanford Presents Plan for 100% Renewable Grid in California by 2050

In a comprehensive paper, researchers led by Dr. Mark Jacobson at Stanford University have released a report detailing how California can be transitioned to a completely renewable grid, powered by wind, water and sun, by 2050.  Below is a copy of the Abstract, and the full report is hosted at this link here.

This study presents a roadmap to convert California’s all-purpose (for electricity, transportation, heating/cooling, industry) energy infrastructure to one derived entirely from wind, water, and sunlight (WWS) generating electricity and electrolytic hydrogen. We outline the requirements, costs, benefits, and policies needed for the conversion. The plan contemplates all new energy capacity powered with WWS by 2020, 80-85% of all energy use powered with WWS by 2030, and 100% by 2050. Electrification plus modest efficiency measures would reduce California’s end-use power demand ~44% and stabilize energy prices since WWS fuel costs are zero. Complete conversion of California’s energy system to WWS by 2050 would create 205,000 net permanent jobs, eliminate ~16,000 (4,800-29,600) state air pollution deaths/yr, avoid $131 (39-296) billion/yr in health costs (6.9% of California’s 2010 gross domestic product), and reduce 2050 global climate costs by $48 billion/yr. The California air-pollution health benefits plus global climate benefits from eliminating California emissions would repay the $1.15 trillion capital cost of the 631 GW installed power of a 100% WWS system within ~6 years.
Posted by Adam P. at 2:41 PM No comments:

TODAY is Shout Out for Solar Day

OCRenewabler's... HAPPY GO SOLAR DAY. Here is an article from ASES Executive Director Seth Masia with an update on where we are today with solar in our society. Enjoy!

Unity on Shout Out for Solar Day


The recent attacks on solar arrays for homes and businesses have opened some fault lines within the renewable energy community.
Specifically, with the backing of fossil fuel companies and the American Legislative Exchange Council (ALEC), investor-owned utility companies across the country are trying to roll back the net metering rules that encourage the operation of small solar arrays in 43 states. (For background, see Utilities Fight Net Metering State by State.)
Utility companies actually love solar and wind power. They’ve found that free fuel is a great concept and that they can make money selling the power, which turns out not to be as intermittent and undependable as they still claim. But for-profit utilities (as opposed to municipal utilities) love solar and wind only when it’s generated by very large central generating plants – large wind and solar farms. When power comes from central plants it can be sold and billed on the traditional transmission line model, a business model invented by Thomas Edison and Samuel Insull in 1883.
But when solar and wind are used to generate power at small user-owned stations, on rooftops and ranchland, users don’t pay for the electricity they use on site. That constitutes only about 1 percent of America’s power right now, but it’s growing fast – according to the Solar Energy Industries Association, installations in 2013 rose to 4.3 gigawatts, up 27 percent over 2012, and small arrays accounted for 20 percent of that in the third quarter.
Up to 90 percent of those small arrays are installed by leasing companies. And so we have a sorry divide opening between homeowners and small business owners and leasing companies and small installers on one side, and for-profit utility companies on the other.
Solar equipment companies are neutral in this game. They want to sell photovoltaic panels and inverters to large developers and to small-array owners.
Not quite analogous is the divide in wind. Utilities love big wind farms and hate small wind installations. Manufacturers of large wind turbines for utility-scale use do not sell small wind turbines for farmers, ranchers and small businesses. In general they wouldn’t mind if the small wind industry simply blew away.
It’s important for voters and consumers to understand that when a for-profit utility company boasts about how much solar and wind it uses, that doesn’t mean the company wants you to have your own power generating system. They don’t. And they’re working behind the scenes to kill net metering so you won’t want your own system. If you already have one, they’re working to charge you more simply for using it.
If utility companies were really interested in the rapid growth of renewable energy, they would work to revise their own outdated business model. They’d admit in public that distributed generation saves money on fuel and infrastructure, and thus benefits all ratepayers. And they’d figure out how to share the cost saving with the ratepayers who contribute power to the system by building solar and wind with their own money.
In the meantime, solar and wind advocates can’t risk being recruited to the wrong side in this debate. The American Solar Energy Society supports America Supports Solar, Vote Solar, and the dozen other pro-solar political initiatives. We’d like to see all these movements declare explicitly that they unite on the side of small arrays as well as big ones. ASES chapters in 43 states expect your support in maintaining the growth of small systems, through net metering and feed-in tariffs. We oppose efforts by for-profit utility companies to kill the goose.
Posted by Adam P. at 2:01 PM No comments:

Facts about tax dollars and energy in the US

First off, Happy New Year!  Now, down to business.  The recent 60 Minutes segment on the Clean Tech industry has received an enormous negative backlash from seemingly every nook and cranny of the industry calling for everything from corrections to the reporting to out right reversal of most of the information reported.  Here are links to just a few of the protests:

Us here at OC Renewables had a similar feeling about the story.  It seemed incredibly one sided, showing how tax payer dollars went to companies and institutions trying to develop technology and products in clean tech, with some of them failing.  As anyone who plays in the world of new technology and new products should know, most new things will fail.  However, what 60 Minutes completely missed was that this failure is NOT A BAD THING.  Technologists and engineers know that failure is a valuable tool meant to weed the good ideas from the bad and push the development of new technology and ideas forward.  The only bad failure is prolonged failure.

But, the other shocking part of this story was the complete lack of balance.  It was never once mentioned how much tax payer money goes towards conventional sources of energy.  And, even more shocking, there was no mention of emissions from conventional energy vs clean energy.  Why on earth the staff at 60 Minutes thought they could get this one over the clean tech industry is 100% beyond me.

If you want to see some real facts on tax dollars in energy, check out the image below, and you can decide for yourself if tax payer dollars are being spent fairly with regards to energy in the US. 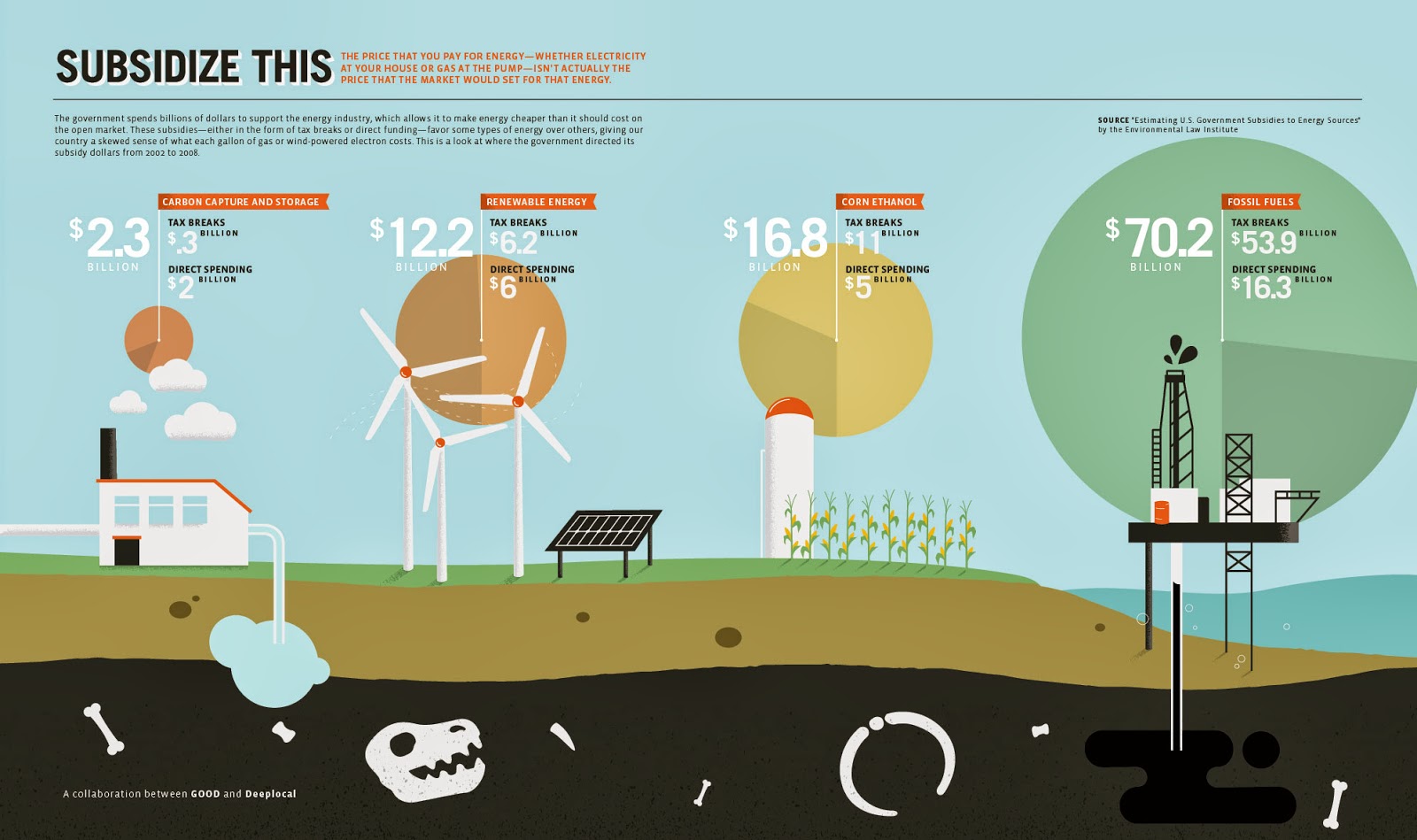