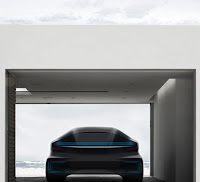 Last month the OCR blog post was about the re-launch of Fisker with headquarters in Costa Mesa and manufacturing plans for Moreno Valley.  A new month, a new electric car company in the LA area!

Faraday Future, a 2014 founded start up in "stealth mode" until just a few days ago and filled with ex-Tesla talent has opened the kimono a little on their plans to challenge Tesla and other established car makers in the race for the first long range affordable electric car.

Like Fisker, they have set up shop in SoCal (Gardena), likely hoping to draw on the what seems like a constant stream of aerospace layoffs and company relocations (see this Boeing article from Dec, 2014) and also the recent departure of Toyota from nearby Torrance.

Also like Fisker they have a bunch of openings on their careers page.  It is certainly very odd to see two electric car companies announce SoCal headquarters instead of the default Bay Area locale, however it is sometimes easier to attract non-rooted workers to SoCal rather than the Bay because of housing affordability.  This is of course GREAT news for all us here in OC & surrounding area as OC + LA continues the real-time rise as a clean tech power, and the LA basin continues to attract tech talent, investment and employment!

Let's see if threes-a-charm and another electric car company announces LA plans in August!
Posted by Adam P. at 11:22 PM No comments:

The MagniSun from OC Outdoor Solar now avaliable on Indiegogo 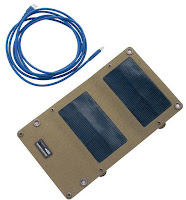 A very cool announcement from OC based company and OC Renewables member Brian Yanity's company OC Outdoor Solar, the launch of their new portable solar charging product called the MagniSun via a live Indiegogo campaign which is embedded in the post below.

This is a very unique product, with the ability to attach magnetically to any fabric surface, such as a beach umbrella or tent.  Rugged, stylish and able to change any USB device... what are you waiting for?!?

Get over to IndieGogo and get it now!

The OC is slowly becoming a solar / clean tech power center, and here's why... 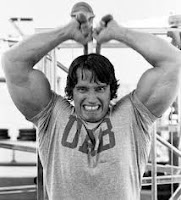 OCR was founded in 2009, but the level of activity around renewable energy and energy efficiency in the OC since then has been fairly modest.  A few solar rooftops here, a few solar rooftops there, but nothing all that grand.  Until recently.  Things have really started to pickup, but I'll let the facts speak for themselves:

The two biggest conference in the US every year are Intersolar and Solar Power International.  On the odd years, there is a 3rd and even larger event, the DOE Solar Decathlon, which can draw up to 100,000 visitors over a two week period with participation from up to 20x university teams from around the world.  Solar Power International comes to Anaheim this September, followed by the Solar Decathlon in Irvine this October.  Talk about a one-two punch for the OC!

Big Companies are setting up shop

We mentioned in June that Fisker Automotive is BACK with headquarters in Costa Mesa, manufacturing plans in Moreno Valley and with a long backlog of jobs it needs to hire for.  Backed by the Chinese firm Wanxiang, this is no longer a scrappy upstart, this is a serious company with a big balance sheet which appears to be planning for the long haul here in the OC.

Furthermore, another growing OC firm has been brought to our attention.  SunStreet Energy Group is a small firm rumored to be growing and staffing aggressively, with headquarters in Irvine, CA.  SunStreet is fully owned and operated by the $10 billion dollar Lennar Homes Corporation, one of the nations largest home builders.  Again, no scrappy upstart here, this is a serious organization with a serious mission to install major amount of solar.

Combine these happenings with the professional organization Clean Tech OC which has been promoting the industry in the OC for years now and you get a healthy atmosphere for clean tech business in the county.

Back in March OCR did a blog post about UCI Professor and water expert Jay Famiglietti and the amount of press attention he was getting from serious news organizations.  But to add further to OC's academic credentials, a team of three OC colleges has formed the Casa Del Sol Solar Decathlon team, one of the 17x competing this year in Irvine.

Everyone knows that the OC is not Berkeley.  In the historically conservative county, the OC masses are not exactly expected to replace every car with a Prius, switch out to LEDs and start line drying the laundry.  However when a clean tech product does meet the .. how do you say.. OC style, adoption can be drastic.  Case in point: The Tesla Model S.  Business Insider reported last week of problems with wait lines at the Telsa Supercharger in San Juan Capistrano.  Apparently the demand on the location is out sized due to the number of Model S in the area and some using for daily charging instead of using them for longer trips, which is what Tesla suggests.

While things are clearly "heating up" here in the OC, one can't help but wonder if this is an isolated occurrence, or if clean tech is ramping in cities across the US?  Comments anyone?