OC Congressman Dana Rohrabacher clearly falls on the wrong side of truth, fact and eventually, history

I urge all OC residents who care about the future of their shorelines, communities, families and planet to stop and think seriously about who is representing them in the US House of Representatives.  Incumbent Representative Dana Rohrabacher (who is up for re-election on Nov 4 this year against Democratic Candidate Dr. Sue Savary) was recently featured as part of a gone-viral Daily Show clip where the House Committee on Science, Space and Technology discussed the scientific communities most recent findings about climate change.

After watching this exchange, a lot of adjectives come to mind concerning the way our Congressional "leaders" are essentially turning hard scientific evidence into satire, suggesting that climate scientists and their models are simply employing "scare tactics" and making predictions for reasons of "job security".  The adjective that most clearly defines their behavior and lack of responsibility in approaching this serious issue in a respectful and meaningful way is disgusting.  Simply disgusting.

We've all put up with Rohrabacher's crazy and embarrassing old uncle tendencies in the past.  He openly writes posts on his website about how we need to focus on humanity's greatest concern... out of control space asteroids (I am not kidding, google "rohrabacher asteriod" for an entertaining list of links).  But with an election on the horizon, do yourself a favor and ask, "Is this the representative I really want speaking for me?  Is this who is best for Orange County on the national level?"

I urge you to go out on Nov 4 and vote for who you think is best for you.

OCR is happy to support a great networking event happening tomorrow evening, the YPE (Young Professionals in Energy) fall mixer.  Come on down to meet colleagues and new friends in the energy biz!

See you at the HB Green Forum and Expo this Saturday, Sept 13 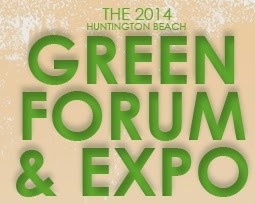 A reminder to everyone of a great, local Orange County event, the 2014 Huntington Beach Green Form and Expo, happening this Saturday, September 13, 2014 from 8 am till 3pm.

There will be a forum session from 8:00 am till 10:00 am at the Shorebreak Hotel right near the pier in downtown Huntington Beach followed by the vendor and organization expo at the pier from 10:30 am till 3:00 pm.  The expo is a great event with a ton of vendors from "all natural" surf wax to information on solar energy and home energy upgrades from a whole host of vendors.

Anil from OC Green Drinks will be there encouraging people to get involved with the social aspects of clean living in the OC!

More information about the event at this link here.